Bob Schneider and band rolled into the Pour House in Charleston, SC this evening to a very eager and energized crowd. Sandwiched between two fedoras accompanied by a trumpet and electric guitar, Bob took center stage with a beard and long flowing hair. Playing such classics as “Bullets”, “World Exploded in Love” and “Metal and Steel” warmed the audience for what would grow and climax with a rejoicing of song and dance.

The first half of the set was rather sedated to those accustomed to a Bob Schneider show. He soon put his foot down and said “It’s time to get this mother fucking party started”. The band blended mamba, calypso, funk, rock, blues and pop into a true celebration of this singer/songwriter.

Bob Schneider truly appreciates the element that has kept him on stage for over two decades, the fans. His candid ad libs and brash commentary made for an entertaining evening with a crowd avidly welcome to the elements of participation.

The talent of this man is truly a vision to be hold. Not only representing the modern generation of the lies of Dylan and Guthrie but factoring in the big band leaders of the 30’s and 40’s. He only displayed a segment of his talents as he played piano, guitar, harmonica and trumpet during his one hour and forty minute set.

The deepness in his eyes showed that rare accomplishment of an entertainer; the ability to connect.
He truly connected to everyone from the front row to the last person at the back of the club. 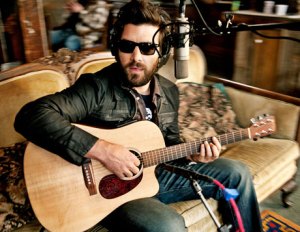 He is a presence onstage that takes his Texas roots; adding in the flavor of every city he has visited on his many bus tours and stirs it all together to create a melting pot of insightful lyrics and sounds , a fun evening and most importantly a continued following that is only growing over time.

His lyrics are bold and profound. Each song tells a story. Like a teacher reading from a book, we are students to his words. A true modern musical poet.

Bob Schneider with his mind in constant motion and some of the purest talent in the music industry may very well be the most talented singer/songwriter that you do not know.

You should know Bob Schneider. He will rock your ass off and leave room for dancing.

One thought on “Music is All Around – Thank you Bob”