As reported by sports columnist George Diaz at OrlandoSentinel.com

It’s not lacrosse season, but last week Winter Springs (Fla.) High School played one of the most significant girls lacrosse games in memory. The score didn’t matter in the least. The significance came from the game’s sheer existence.

The Winter Springs girls lacrosse team played a special scrimmage at halftime of the Winter Springs junior varsity football game on Wednesday night. The Bears varsity squad squared up against their JV counterparts, the only way the school could logistically hold a scrimmage months out of season on short notice. And the most important spectator at the game was Carl Defoe, a middle-aged man devoid of body hair after five rounds of chemotherapy, cheering on his daughter for the first — and in all likelihood, the last — time in his life. 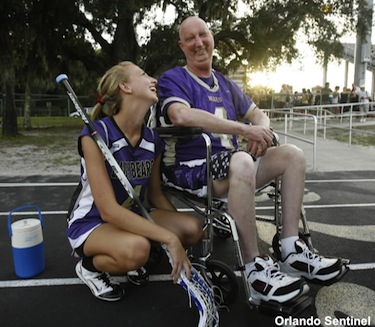 Defoe is dying of lung cancer, and he knows that he doesn’t have much time left — six weeks, eight weeks, maybe more. The cancer has spread from his one remaining lung to his brain stem and spinal cord. While Defoe insists that he isn’t done fighting the disease yet, the one thing that left him most anguished was knowing he’d never get to see his daughter, Heather, play in a high school lacrosse game.

So, on Wednesday, at halftime of the Winter Springs junior varsity football game against Oviedo High School, the two girls lacrosse squads faced off in a brisk, seven-minute scrimmage. Heather Defoe played for the varsity squad instead of the junior varsity team she’s scheduled to play with this spring … and she scored three goals.

Then, when it was all over, the two teams gathered around a happy man in a wheelchair, posed for cameras and the whole special event was gone, over as quickly as it had come.

Gone, but not forgotten by anyone there, not least of all Carl himself. If there were ever questions of whether sports can change a person’s outlook on life, they should be quieted by what Carl Defoe told Diaz just after the scrimmage wrapped up. 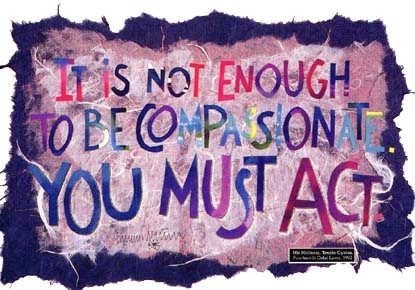