Anne Francis passed away on Sunday after living a very robust 80 years on this earth.
Known for her portrayal of Altaira ‘Alta’ Morbius in the 1956 science fiction classic “Forbidden Planet” with Walter Pidgeon, made her a sassy and lovable heroine to so many geeks and movie fans alike.

Having fought a long extended battle with lung and pancreatic cancer, Anne Francis passed away on Sunday, January 2, 2011. This is not meant as a remembrance piece or obituary, but an interesting twist to her passing was the monthly scheduling of the Turner Classic Movie January film guide. On Sunday, January 2 at 6 PM EST, Turner Classic Movies (TCM) scheduled “Forbidden Planet” to air and on her final day on earth, one of her most memorable roles was aired for millions to see as her body laid to rest one last time. 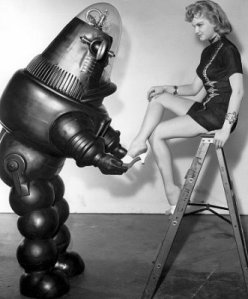 In one of my traditional deep sleeps. I mean so deep, I don’t even hear the songs playing on my blackberry throughout the night as I receive all my daily overnight spam. During my rest, I had a dream that I was almost hit walking across the street by an old classmate. One I had not spoken to in many years. Of course we are connected on Facebook like so many of our former high school and college class mates, but never formally spoke.

First the first time ever, he emailed me out of the blue. Just a few hours after her appeared in a dream, he was there in reality.

Whether you are spiritual or not, believe in mystic wonders or just fascinated by the wonders around us, it welcomes room for conversation.

Let us add this latest mystery to the previous whispers of coincidence (https://recruiterpoet.wordpress.com/2010/10/08/cosmic-signs-when-coincidence-is-too-real-to-ignore/) and one cannot ignore signs that are placed in our life path to open our minds to the mystery of pure wonder…