Mark Sanchez(notes) knew his buddy, Aiden Binkley, for only a few weeks. 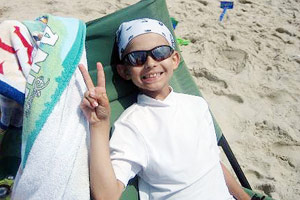 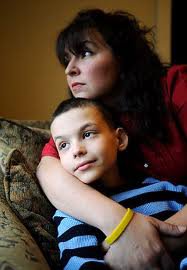 It felt more like a lifetime for the New York Jets quarterback, who is leading his team into the postseason with a heavy heart and fond memories of perhaps the bravest person he has ever met.

“My man, Aiden,” Sanchez said during a radio interview earlier this week. “It’s breaking my heart. Man, he’s so tough. He brought me so much inspiration.”

Binkley was an 11-year-old fan from Floral Park, N.Y., who died last week from a rare form of cancer. He was an avid Jets fan, and his dream was to meet his favorite player, Sanchez, and the rest of the team. The Jets granted his wish last month, throwing in a tour of the Jets’ facility.

“Just for you to know a little bit about him and understand that he’s terminally ill and the courage he showed, you’d never know he was going through anything,” coach Rex Ryan said Thursday. “I mean, he had a big smile on his face. He was just happy to be here. He’d talk to you and look you dead in the eye. He was awesome.

“I came walking out of there thinking, ‘Oh, my goodness.’ I mean, it’s just crazy how courageous he was.”

Binkley died from rhabdomayosarcoma last Thursday, a few weeks after meeting his idol.

“It’s hard to talk about him,” a choked-up Sanchez told 1050 ESPN Radio on Tuesday night—just hours after his friend was buried. “He meant the world to me. Just in the couple of weeks of knowing him, I saw his personality, I saw his competitive spirit, I saw him fighting every day. And I’m complaining about a shoulder? Are you kidding me? This guy’s 11 years old and has cancer eating at his body, and this kid’s fighting everyday, he’s smiling every time I talk to him.” 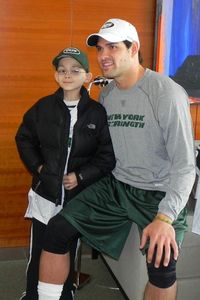 Binkley’s parents, Lisa and Michael, have an online journal at CaringBridge.org, and they kept family, friends—and Aiden’s own fans—updated on their son’s brave battle.

Last Thursday morning, Lisa Binkley posted a message that her son was “still fighting” and his heartbeat was still strong.

“It is with absolute heartbreak that I write to you. Aiden is an angel now.”

After hearing of the young fan’s death, the Jets held a moment of silence before their regular-season finale against Buffalo.

“He was an inspiration to me,” Ryan said. “I guess you knew it was coming, but you just have so much respect for that young man.”

Sanchez still wears the green bracelet Binkley gave him on his left wrist, a constant reminder of the courageous guy who suddenly came into his life and was gone way too soon.

Their special bond was formed on Dec. 15, when Binkley came to the Jets’ facility and met a number of Jets players.

“The thing that was funny was how mature he was for being so young,” defensive end Mike DeVito(notes) said. “I guess when you go through a situation like that, it must force you to grow up quick. You could tell he was an articulate, smart kid.”

Whether it was Ryan, DeVito, Antonio Cromartie(notes) or Dustin Keller(notes), Binkley wasn’t intimidated.

“He wasn’t star-struck at all,” tight end Matthew Mulligan(notes) said. “You’d think as a little kid and you’re getting to meet all of these football players and the head football coach of the New York Jets, but he wasn’t.”

Then, it was time to meet Sanchez.

“You could see the look in his face,” DeVito said. “He was so happy to see football players, but then to see Sanchez, man, that extra, ‘Wow!’ It really was powerful stuff.”

Sanchez spent some extra time with Binkley, and the two got to know each other so well that the quarterback gave him his phone number and told him to text him whenever he wanted. Such as the time Sanchez was sitting at his locker before New York’s game at Pittsburgh on Dec. 19, going over the game plan.

“He’s texting me, asking about the weather,” Sanchez said. “He said, ‘Man, it looks cold out there in Pittsburgh. I’m glad I’m watching from home. Good luck.’ Little stuff like that really fires you up.”

A few hours later, Sanchez was walking off the field with a 22-17 victory and planning to send Binkley a game ball.

It didn’t end with texts, though. Sanchez used his free time to visit Binkley and his family at their home, sitting with him and talking about whatever came to mind. Of course, the conversations usually centered on the Jets.

“I mean, he has to get carried up the stairs at times because he’s so weak and all he wants to talk about is L.T. (LaDainian Tomlinson(notes)) and Darrelle Revis(notes) and Rex Ryan and me,” Sanchez said. “Oh, man, it kills you, just thinking about it. I love him to death.”

Sanchez never went to the media with the story, preferring to keep things between him and Binkley’s family, and still hasn’t addressed it other than during the radio interview. Now, Sanchez carries the memories of his inspirational young friend into the Jets’ first-round playoff game at Indianapolis on Saturday night.

“Mark has done an exceptional job of handling something that’s so traumatic,” Mulligan said. “For him to be able to come in here and do his job and not show one iota of being affected by it with how he works, it shows he’s a leader. Because I know he was really touched by Aiden’s short life.”

And, Sanchez is not alone. Binkley left a lasting impression on everyone he met at the team’s headquarters last month.

“That’s the kind of stuff that makes me truly believe that we’ve all got to treat every day like we’re dying,” DeVito said. “I mean, wow, it’s so easy to get caught up in everything and just go day by day and not take full advantage of everything you have. Meeting a kid like Aiden makes you love your wife better and love your kids better because you have to treat each day the way he did.” 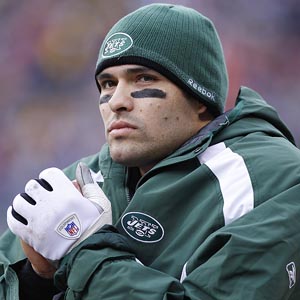