“No matter what you’ve done for yourself or for humanity, if you can’t look back on having given love and attention to your own family, what have you really accomplished?”

We got the text we had been waiting all day for.

“She is dilated 9 centimeters and are looking like it may happen as soon as 8 PM.”

It is 7:15 PM now and we are not only 30 plus minutes away from the hospital, but there are cards, flowers, chocolate covered espresso beans and energy drinks to be bought. Without hesitation we departed the salsa filled bar and headed to the car. With the wind in our hair and the convertible top down, two childhood friends and a self proclaimed best friend set out to be a part of something very special.

This was just not the birth of a child,but a miracle almost four years in the making. Given the struggles and tests to their will and power as a family, this night was to become some much more important than all of us.

As we arrived, just a few moments before the first cry and big announcement, we saw both families, waiting patiently, with the back drop of the Twins game just above. Grandparents, uncles, aunts and friends all greeted us with smiles and hugs. As we sat and waited, the realization of how each of these lives would change was starting to become a reality. To add more drama to increase our heartbeats even further, we learned of an earlier scare where there was a drop in the heartbeat detected in the baby. Fortunately, the doctors and nurses corrected the concern and the waiting period continued.

The two grandfathers talked about whether he would become a baseball player, golfer, bowler or football star. The grandmothers and friends talked about the pros and cons of breast feeding and apparently the profitability of doing it for other people’s children. We will leave that segment out for the moment. It soon turned to what was about to happen and how each person in the room dealt with a similar situation when they bore their children.

As I watched two generations about to welcome in the third and realized how much the mother to be and I had been through together in the best and worst of times, I felt a relationship with a baby that was yet to leave its mother’s womb.

In a moment, the new father’s sister appeared in the doorway with camera in hand shouting “He’s here”
Like the 3000th hit or the game winning home run of the World Series everyone got up and cheered and hugged and lived out one moment of perfection forever etched in our box of memories. Mother and son were healthy and with a deep push a new life entered this world. It is amazing when you think that something so small and so innocent can have such a penetrating effect on so many people.

Now, seconds, become minutes and minutes eternity as we all waited to greet the little angel into the world and hold him up as we rejoiced not only for his journey, but how his little smile saved us all and made us believe once again in the miracle of life. Many were comforted by the instant gratification of the birth video that was passed around the room. I of course took my leave from the room for a few moments.

The nurse, in her welcoming blue outfit was soon standing in the doorway and we all knew. Then the words we had all waited to hear were vocalized, “You can all go in to see the baby now”. Grandparents first of course and then the rest of us shortly behind. As we all crowded into the room, the dimly lit room became illuminated with smiles all around the bed surrounding the mom and baby comfortable side by side. 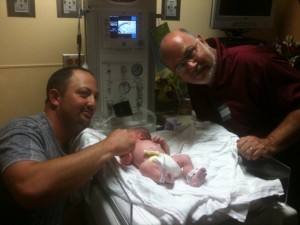 Grandpa broke out the bubble gum cigars, as one by one mom received hugs from all her family and friends as dad held his baby boy. He was a natural. The baby just fit right in his arms. As exhausted as he was, given that he was there for almost 14 hours, he still had the energy to smile from cheek to cheek.

One by one, the motherly and fatherly instincts came out in each and every person in that room as they held baby Tino for the first time. With some, an instant connection was made as the eyes met and in one synchronized motion both seemed to smile at one another with an unspoken gesture.

As pictures were taken, conversations happening, hugs being offered and a nurse continuing to maintain some order, my focus remained only on the baby. Almost like a moment of complete focus, I was able to block out all noise and movement to see the perfect face of this newborn. At no other time in our lives are we this close to purity. It is a moment where you have the chance to share in the energy of this newborn and feel more alive than you can imagine.

Soon, we new the evening had to come to an end so the mother, father and child could rest together as one family in each others arms. When they awoke the next morning, they could look at baby’s first sunrise and know this is the first day of the rest of their lives together.

I have witnessed so many global events that have inspired, sporting events that have been deemed modern miracles and gestures that have moved nations, but the truly great miracles of our lifetime bear in the act of creation. Thirteen people stood in a small hospital room sharing in the greatest gift, the most amazing miracle life has to offer. It is a moment we will all remember and cherish.

Last night we were all family….sharing in the first and only official birthday of Tino.
Yes, it was made official as the entire room sang “Happy Birthday” officially calling this day, the day of his birth the one and true birthday.

To Sonni and Sam, the amazingly supportive grandparents, siblings and friends, THANK YOU for letting us into your very private moment. It has been an honor to be and continue to be an important part of your life.

One thought on “The Baby Unicorn Has Arrived – Welcome Tino”