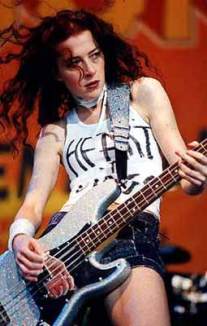 The idea of the female dominate star in cinema is rare in its own right but the utilization of a female lead singer in a rock band has hidden itself so well from Hollywood. The power to influence others with music and lyrics and send a powerful message of independence and prowess can have such an rescinating affect on the empowerment of young girls and woman.

We thought we would take a moment to reflect on some of the actresses and characters that have used the power of film to show how a strong female presence can make a difference. With ambition and courage, one voice can impact many and one dream and set the path to greatness.

This is a tribute to some of the great performances that has combined music, power and influence to not only make a defined statement, but to get you on your feet cheering.

I would be lying if I said this wasn’t the first moment I fell in love with Diane Lane. This is also one of the first examples of transferring the comic book or graphic novel genre into film. With the likes of Willem Defoe, Rick Moranis, and Michael Pare, Streets of Fire created a Rock and Roll Fable that electrified the audience and left you wanting more. A simple tale of girl loves boy, boy leaves girl, girl becomes star, girl gets kidnapped, boy rescues girl, boy leaves and follows the sun to the next adventure and girl reflects on her one true love. If you love music, adventure and romance, this is one story that will not disappoint.

Many have criticized this as one of the worst DC Comic adaptations ever created. Whether you are a fan of Howard the Duck or not, there is no mistaking that Lea Thompson took hard edged rock and beauty to another level. Here character had a soft sensuality and an sharp appeal whether she was on or off the stage. You may love Howard the Duck or feel completely let down, but this strange tale is worth its weight in gold to see Lea Thompson’s Beverly Switzler light up the stage.

Stepping into the feet of a living legend is a very difficult task to under take. For Kristen Stewart, who has taken professionals risks most of her career, this was big leap. Along with Dakota Fanning, Kristen took on the role of Joan Jett during the early years of her rise as the leader of the Runaways, one of the first pure female punk bands. With confidence and integrity, Kristen transformed herself into Joan not just in appearance but in her movements, emotions and convictions. This film is a nice reflection on the life of the woman that helped shaped the face of music, but also a remarkable portrayal by Kristen Stewart as Joan Jett.

What can you say about Josie and the Pussycats. Girls everywhere loved Josie, the band and all their antics. The film may not fall under the category of legendary. Maybe campy is the best term to use but there is no question, it was a little fun. In the spirit of the Monkees and Scooby-Doo, Josie and the Pussycats took on music and adventure in this light-hearted comedy. Rachel Leigh Cook with her short heart, beautiful eyes and let loose style took on the role with flare and style.

In her infamous role as Mary Rose Foster, Bette Midler rolled it all up into great performance from start to finish. It wasn’t a stretch for her, but she poured out the fullest extend of her emotions in this film and left herself be vulnerable to her audience. That is rare in film and truly a treat for those that were able to bear witness.

Wayne’s World, Wayne’s World! Party Time! Excellent
What can you say about a three minute recurring skirt converted into a major motion picture…Excellent!
But every great basement dwelling buddy movie needs a great kick butt rock goddess with bangs. Thus enters Cassandra Wong, a.k.a. Tia Carrera. Playing the love interest of Wayne, Cassandra does not stray from the fact that though she is a lover, she is still and always will be a rocker!

Tina Turner is a legend, not only for her musical career, but for the courage she has possessed throughout her personal and professional life. She has overcome so much adversity to become the role model that she has become that it was only fitting that a bio pic was developed to honor her. Angela Bassett, with her guns and powerful on screen presence presented an honorable treat playing the great Tina Turner. You saw a woman of power and vulnerability fighting for her dreams and finding the path to success. What an amazing performance.

Russ Meyer, the king of film exploitation. Should you expect anything else from this legendary film maker. He continued his formula in Beyond the Valley of the Dolls creating the band The Kelly Affair led by Dolly Read. Was the band defined as pure rock. Perhaps not but they could bring boys to their knees. As most Russ Meyer films, always a treat to watch.

One thought on “Top Female Rock Stars in Film”