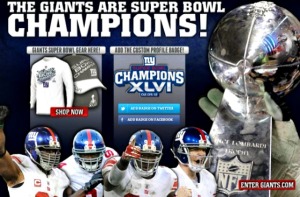 It is official, the New York Giants have won Super Bowl XLVI. This comes as devestating news to the New England Patriots as well as Las Vegas and off shore gambling platforms who stand to lose billions of dollars over the next 12 hours. Now what do we do? The beer and wine are purchased, dips are being stirred, wings are being defrosted, corn hole and horses shoes are set up and jerseys are being ironed. The good news is that most of the commercials (Thank you Jerry Seinfeld and Matthew Broderick) have not yet been aired and we do not know the final score of the match up.

Early indication from analysts is that the commercials may very well disappoint lacking in creativity and originality but aside from Budweiser, Doritos and Go Daddy, we may see the next great commercial (aka Apple circa 1984). We hope the analysts are wrong given that there is not much other reason to watch the game. There is a possibility, the coin toss has not been decided and what type of polo shirt Peyton Manning will be wearing as well.

We look at the New York Giants premature declaration of victory (Website Mishap) and think back to some of the premature announcements of death by Twitter of Michael Jackson and Joe Paterno as well as the false deaths of Chuck Norris, Jon Bon Jovi and the great Rick Astley.

So, is this an issue that must be addressed or do we need to accept that with the instant tools of communication with social media platforms and smart phones these errors of judgement will occur because we want to be the first to break major news? We have all been inaugurated as junior newscasters to the world. As part of that duty, we must take the role of paparazzi and fight to break the news to the masses.

This is quite a cultural shift, almost to the point where it has numbed our ability to feel any longer. I recall several months back, I was at a pub enjoying some nice banter with a few friends and the television announced a surprise press conference from President Obama at midnight. A student two seats down turned to me and said “We killed Bin Laden”. I asked how he knew. He informed me that a friend of his was interning at the Capital and leaked him the information. Not entirely to my surprise, he was right, but more important was the reaction of the crowd. The bar cheered and then a full round of shots was bought for us and within 5 minutes, we were back to talking about the banter we were engaging in prior to the press conference. There was truly no time to allow the emotions to sing in and react to this monumental event. I can still recall the importance and length of my memories of some of the most life altering events in my life time. I can still remember every minute of the events before, during and after the Challenger Disaster and September 11.

When hundreds of thousands write RIP/R.I.P. on Twitter and Facebook without really knowing anything about the celebrities that pass, is it really a sign of remorse or a narcissistic attempt to be part of something? It is almost to a state of emotional void that our society has become. Have we lost the ability to feel? If we share a cause or express a comment of remorse, are we off the hook?

If you have not yet, put your money on the New York Giants while you can. History has been determined and for the second time since the 2007 season, the New York Giants have defeated the New England Patriots to win the Super Bowl. Enjoy the game, the commercials and the half time show.

When events happen in our lifetime that alter the way we think and the impact on our lives, give yourself some time to let it sink in and let yourself feel. Try not to break the news BEFORE it actually happens.

In the end, life is not about reporting it; its about living it.