You can read novel after novel, see film after film, view picture after picture and mentally visualize the romanticism and beauty of Italy. With it’s rich culture, deep history, scenic backdrops and cities built on the words of romance, Italy is a slice of heaven carved into the landscape of Earth.

I was fortunate to spend a summer in Italy. Situated with an apartment in Florence with my best friend and transportation to see the countryside of Tuscany, the eastern and western beaches, Venice, Rome, Bologna, Milan, Pisa and the Northern Alps, I was swept away by the mysticism of Italy.

Remembering every minute of my journey, even to this day is a reflection of the impact that country and that trip has left on me. It was almost with sorrow that I would see tourists come in and out of the city like cattle every few days and come to the realization that they never got to know the rich culture and tradition Florence and Italy had to offer.

As an ode to what I hope to be a second home someday and in my mind, already is, I would like to provide you with some of the personal memories and reasons why I love Italy…and you should too.

I hope by the end of these short anecdotes and photos, you will find inspiration to leave the world behind for just a while and experience a little of the magic I absorbed during my stay.

1. Family and tradition are so critical to happiness. Sunday’s in Florence always put a smile on my face. As drank my coffee and gazed out my window, I could hear laughter, screaming, running and playing. Yet not from the streets which were often quiet. Sunday was a day of prayer and family. In many villages and towns, generations of families lived nearby or even under the same roof. Sunday was a day to bring everyone together and share their week in games, conversation and dining. It was a day to reflect on the importance family brings to inner peace and happiness.

Each day, an elderly gentleman in his 80’s would sit on the curb outside his apartment and weave baskets. As he completed them, he would like them up by size and continue for several hours. On Thursday mornings, his wife would meet him and sit by his side. She did not disrupt his work and rarely spoke, but the simple company I imagine brought him pleasure. I am not sure if he sold any or even cared but this was a tradition he never seemed to let go of.

Across the way was a small fruit and vegetable stand that opened and closed at the same time each day. At the conclusion of the day, the remaining produce was carted over to a small watermelon stand in the park where it would be sold into the night.

An older woman one block away walked her dog every morning about 9 AM on the same route. Often I would see her and smile and keeping with her routine, she never smiled back. That just made me smile more.

2. There is value and comfort in the simplest tasks. On one comfortably warm weekend morning, Sonni and I got a loaf of white bread and walked over to a small church. This church had about ten concrete steps to the front entrance. We spend over three hours feeding bread to the pigeons and sparrows. It was a little turf war as the little sparrows would swoop down and grab the bread before the slow pigeons could get to them and this angered them to try harder. This was such an unexpected pleasure for us.

On another evening after a long meal, we sat on the base of the church steps and fell asleep for an hour with only the sounds of passing people to soothe our rest. We were completely safe and at ease.

Often in the piazzas, jazz bands and other street performers would set up in the courtyard and hundreds would flock with drink in hand to enjoy the sounds of the classics.

3. The vineyards..Oh, the vineyards. Like the smell of fresh grass and the feeling of awe as you look out on Fenway Park or Wrigley Field, the essence of being on top of a mountainous road overlooking hundreds of miles of wine vineyards is a spectacle. Now only is it a beautiful site but you are taken back hundreds of years and becoming a voyeur to generations of families that have cultivated and harvested for our pleasure.

4. The essence of dining. In Europe, especially Italy, dining is a fine art. One that is slow, well timed and purely relaxing and entertaining. A traditional dining experience for us was between two and three hours. It began with an appetizer and bottle of wine and sparking water, then entrees, coffee and dessert, great conversation and fun people watching outside on the city streets. Each evening, we would lose ourselves in the handmade pasta and rich tiramisu. It was an indulgence that was rich in food and pleasurable in the company and the comfort. Unlike United States dining that is volume based, Italians become absorbed in the food and the atmosphere.

5. You are in the presence of the visionaries of all invention, literature and art. Standing on the final resting places of Galileo, Michelangelo, and Dante, I was in awe over the amount of pure vision, genius and world contribution that was lingering in the walls of the churches.

6. Beaches have no eyes. Italian beaches are without limit, without restriction and without judgement. Clothes, no clothes, old, young, relaxed, playful; it doesn’t matter. The beaches are about the fresh blue Mediterranean waters, crystal white sands and escape. Pure beauty with mountainous backdrops in the distance. 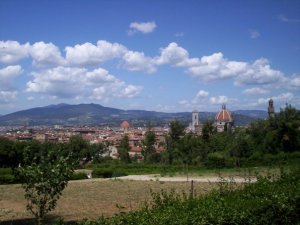 7. Time does not change. Whether it was Venice, Rome, Florence, Pisa or Sienna, the look, feel and value placed on history and the forefathers that created a culture rich in music, art, theater is still as significant today as it was in the 1600’s.

8. People are treated equal. There is no age discrimination in Italy. There are 80 year old people working and living vivacious lives and parents out with their infants until midnight. Family is much more liberal and open in this culture.

9. Diversity. Whether you want a quiet church experience, an afternoon at a vineyard or a world class fashion show in Milan, Italy has everything from the motorcycle racers to designers to the Pope. It is a country that spans all social and economic levels and welcomes you with open arms.

These are some of the many reasons, Italy is a country that allows you to escape life and get swept away in its magic.